The lowdown on Jephthah 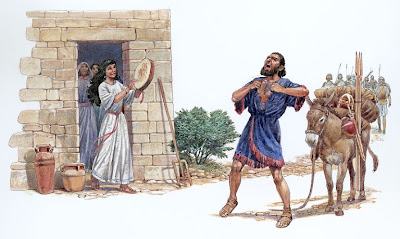 Judges 11:1-3 Now Jephthah the Gileadite was a mighty man of valour, and he was the son of an harlot: and Gilead begat Jephthah.
And Gilead's wife bare him sons; and his wife's sons grew up, and they thrust out Jephthah, and said unto him, Thou shalt not inherit in our father's house; for thou art the son of a strange woman.
Then Jephthah fled from his brethren, and dwelt in the land of Tob: and there were gathered vain men to Jephthah, and went out with him.

1. What's in a name? His name means "he will open." His story opens our imaginations, as well as a real can of worms (his vow).
2. The nut doesn’t fall far from the tree. He was a Gileadite. His lineage was from Manasseh, 1/2 of which settled on the other side of Jordan.
3. A Man’s man. He was a mighty man of valor.
4. White trash. He was an illegitimate child, rather, his parents were illegitimate, his father a whore monger and his mother a harlot.
5. The black sheep of the family. He was run off from home to the land of Tob. Tob means "good." Hence, "Goodland."
6. Like begets like. He attracted other disaffected men and amassed a small army.

I think we can safely say that Jephthah was clearly a man with issues. Yet, God allowed him to rise above his raising and become a real hero for Israel.

Application: Everyone I know has "issues." Their background enslaves them in abject mediocrity. But, with God, there are no limits to what He can do for and through us. In fact, a cursory reading of the Bible (and history) seems to indicate He delights in using the unusable.