A Little or a Lot 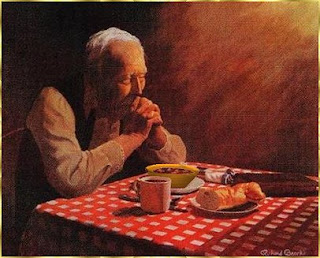 Pro 16:8 Better is a little with righteousness than great revenues without right.

Picture a gent hunched over his pock marked little table in his modest little home, eating a bowl of Ramen noodles. The hovel is quiet except for his slurping of the soup. A kitty squeezes between the table leg and his, wanting a little human interaction.

The man's Bible is open to the Psalms where he has just read about the goodness of the Lord. He is quietly giving thanks for his blessings.

According to the world's standards, the man is a loser. He has no set of wheels that would turn heads, no bank account to speak of, no large screen TV, no gaming system.

But he has the Lord, his well-worn Bible and assurance of eternal life. He never misses a meal, his work has been steady, his church is small but loving, supportive and very inspirational. Health ain't all that bad either.

Considering the options, if you offered him a fortune, he'd probably give it all away anyhow. His church would get that badly needed Sunday school addition, he'd see to it the pastor got a livable wage, the missionaries would be greatly blessed and his extended family would get some help. He'd be the first to say that a big house would mean a bigger tax burden and more to take care of. His old truck is all he needs to get from home to church, the grocery, work and the hardware store.

So, when everything is considered, this man is better off than the ultra-rich rap star who just passed away with a heart malfunction. He is really happier than the hotel heiress that is super famous for being famous, partying hard every night and shopping with a vengeance every day. He has more deep down joy than the rich folks a couple of neighborhoods over who have huge houses echoing with bitter words and selfish arguments.

It isn't so much about what you have as it about how you got it and what you plan to do with it. Be content with such things as you have and don't concern yourself with ill-gotten gain.
Posted by Pastor Fuller at 7:25 AM