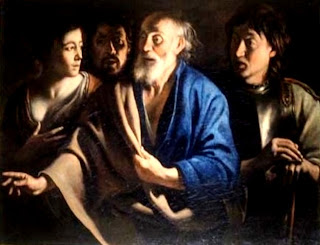 Matt 26:69 Now Peter sat without in the palace: and a damsel came unto him, saying, Thou also wast with Jesus of Galilee. 70 But he denied before them all, saying, I know not what thou sayest. 71 And when he was gone out into the porch, another maid saw him, and said unto them that were there, This fellow was also with Jesus of Nazareth. 72 And again he denied with an oath, I do not know the man. 73 And after a while came unto him they that stood by, and said to Peter, Surely thou also art one of them; for thy speech bewrayeth thee. 74 Then began he to curse and to swear, saying, I know not the man. And immediately the cock crew. 75 And Peter remembered the word of Jesus, which said unto him, Before the cock crow, thou shalt deny me thrice. And he went out, and wept bitterly.

Judas betrayed but Peter denied. Imagine that! Your best friend for the last 3 plus years, the One who healed your mother-in-law, saved your soul, granted you the keys of the kingdom and invested eternity into you. Now a couple little maids come along and point their fingers at you and you act as if you have no idea who Jesus is!

Peter stands up to the temple guards in the garden and cuts off Malchus' ear. But in front of a couple of girls batting their eyelids, he melts like butter in a microwave. This man walked on water and led the Apostles but cowers under the consternation of a couple of skirts.

I remember, as a young man, when I was at the counter of the 7/11 paying for my gasoline. It was during the time 7/11 was under fire for their displays of pornographic magazines in plain sight of everyone including children. The girl behind the counter and another in front were criticizing all the moralistic fundamentalist Christians who were trying to get the trash removed from the stores. Well, the cat got my tongue. I couldn't make myself speak up for what was right. I was Peter before the damsels! If they were burly bikers donning brass knuckles, I would have offered my 2 cents without hesitation. But in front of these girls I became a lily-livered mush-mouth.

Oh, the devil is a sly old fox who knows our weakness! His devices are so keen. We believers are so fickle.

But Peter got over his cowardice, confessed his fault, went on to pen Scripture and boldly offer himself up for an inverted crucifixion.

He offers us this warning: Be sober, be vigilant; because your adversary the devil, as a roaring lion, walketh about, seeking whom he may devour: Whom resist stedfast in the faith, knowing that the same afflictions are accomplished in your brethren that are in the world. 1 Pet 5:8, 9
Posted by Pastor Fuller at 6:01 AM