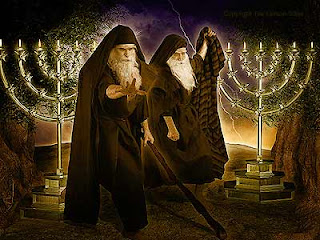 Rev 11:3 And I will give power unto my two witnesses, and they shall prophesy a thousand two hundred and threescore days, clothed in sackcloth.

During the tribulation period, these two prophets of the Lord, His two faithful witnesses likened unto olive trees and candlesticks, preach for just a few days shy of three and one half years. They faithfully preach that Jesus as the promised Messiah, controverting the message of the false prophet that the Beast is the sent one. Their message is highly successful. In a day of internet, cable and satellite, many are reached with the everlasting gospel that they preach. Perhaps more are saved during that time than have been saved in the entire age of grace!

Consequently, the beast is outraged. Their preaching puts a huge crimp in his plan of world domination, and so he seeks to destroy them. Up to now, they defend themselves by spewing fire from their mouths to devour those who would accost them.

They possess such power as to even prevent rain from falling, turn the waters to blood and curse the planet with plagues. These are two extremely powerful preachers! I am thinking these prophets might be 2 of either Moses, Elijah or Elisha. I doubt that they will be the Osteen or Warren types.

Yet, when God's time for their preaching to cease is over, He allows antichrist to get to them and slay them.

It's party time! God's enemies proclaim a prolonged, world wide party to celebrate their demise. "Dead Prophet's Week!" Since Christmas is no longer celebrated, This is to become the new super holiday. Lights are strung up, the halls are decked, mistletoe is hung with care and the malls begin to do a brisk business. Those with the bar code of the antichrist affixed to their right hands and foreheads exit the checkouts with shopping bags full of Dead Prophets gifts. Dead Prophet Trees draped in tinsel of silver and gold and bulbs of red and blue stand sentinel over the many gifts to be given to one another. World-Wide Parcel Service works overtime to assure that everyone will receive their gifts before that joyous day. Carols are joyfully sung, "No hell, no hell, no hell, no hell...", "Oh little town of Babylon", "Good King Antichrist."

One of the favorite holiday activities is to turn to BNN (Beast News Network) to look in on the bodies of those pesky prophets lying in the street. Occupy Temple Mount protesters display their placards just outside the protective barricades, "The Prophets were 1%ers", "Share the Rain!", "Stop the Plagues!", "Fire Breathing Prophets Cause Green House Emissions".

But then God does His thing to ruin Antichrist's holiday season. Right there, in front of the whole world watching by TV and internet, He breathes the Spirit of life into His prophets and raises them from the dead!

The raising of Lazarus was the last straw for the Pharisees. The Raising of Jesus from the dead struck a death blow on death itself. But the raising of these two preachers seals the deal for the Beast. They stand up and the entire world is smitten with knee-knocking fear. To top it all off, God's voice is heard from heaven calling His faithful prophets up to glory. And just to add an exclamation point, a major earthquake hits Jerusalem killing 7,000 men and people start giving glory to God!

Season's Greetings!
Posted by Pastor Fuller at 7:26 AM