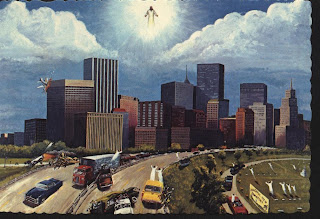 Characteristics of the Latter Times
1Ti 4:1 Now the Spirit speaketh expressly, that in the latter times some shall depart from the faith, giving heed to seducing spirits, and doctrines of devils; 2 Speaking lies in hypocrisy; having their conscience seared with a hot iron; 3 Forbidding to marry, and commanding to abstain from meats, which God hath created to be received with thanksgiving of them which believe and know the truth. 4 For every creature of God is good, and nothing to be refused, if it be received with thanksgiving: 5 For it is sanctified by the word of God and prayer.

Sorry for those of you who preach against eating red meat. :<)

If we can read these desriptors and not see how near to the end we are, we are spiritually blind. Even so, come Lord Jesus!
Posted by Pastor Fuller at 8:49 AM

Good blog! No need to apologize though... truth is truth. :-D

I know several of those that refuse to eat meats of any kind.
I never understood that either.
For some it's a learned thing since birth for others it was learned as a choice.
And they think I am awful for eating meat.