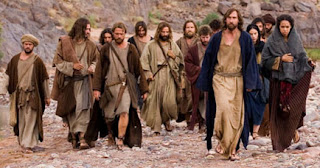 Luke 18:34 And they understood none of these things: and this saying was hid from them, neither knew they the things which were spoken.

At various times the Lord called the disciples slow, faithless, perverse, and a few other derogatory descriptors. He said to Peter, "Get thee behind me Satan," among other things. At times we saw the apostles being impetuous, fickle, frightful and doubtful.

And yet, these are the crème' de la crème' of our profession. We look to their writings as our final rule of faith and practice.

Peter suffered from foot in the mouth disease. James and John were aptly named "sons of thunder," partially exposing their tempestuous nature. Yet, they are directly or indirectly responsible for at least 9 books of the New Testament! Countless churches, hospitals, orphanages and other institutions are named after them and inspired by their ministries.

What gives? Why are these flawed individuals the most influential personages of history? The answer comes in one word, RESURRECTION. When Christ rose again in victory over death, hell and the grave, and when the disciples finally got it all put together in their hearts and minds, it changed them so that they were able to turn the world upside-down. It put steel in their backbones and a fire in their bellies that hell could never quench. The resurrection gave way to their conversion. 3 years with the Savior only prepared them for the greater works they would do by the Spirit in the Savior's absence.

I can relate, especially to the former state of the apostles. Wavering faith, divided loyalties, doubtful disposition, waning zeal, and mind-numbing frustration dog the steps of my service. My shame is that I live and serve God post-resurrection. I believe I have a grasp of entering into the power of the resurrection and the fellowship of His sufferings. I pray for the power of the latter state of the disciples in which the Holy Ghost came upon them and they feared not man and loved not their lives unto death.

O great God, O resurrected Christ, O indwelling Spirit, fill me with power, wisdom, passion and purpose to live each day in the light of the resurrection and of your second coming. Let me serve and preach like Peter the martyr rather than Peter the denier. Allow me to love and encourage like John the Beloved instead of John Boanerges. Amen!
Posted by Pastor Fuller at 8:41 AM