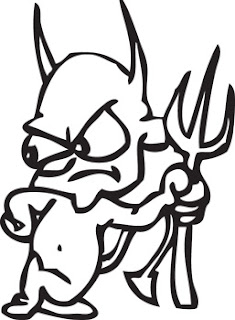 Luke 22:3 Then entered Satan into Judas surnamed Iscariot, being of the
number of the twelve. 4 And he went his way, and communed with the
chief priests and captains, how he might betray him unto them.

Satan was alive and well on the planet when he brought out the bigs guns to wipe out his arch rival, the Son of God. Only three other times in the entire word do we find the head imp himself doing the dirty work by filling someone or something. Usually, he sends his hellish thug underlings.

-He possessed the serpent in the garden to bring the entire race to the bottom. He was successful.
-He filled Ananias and Sapphira to short-circuit the church and its program. They were also destroyed.
-Here, he entered into Judas to destroy the King of Glory. It worked, for a couple of days anyway. He played right into God's plan!
-And someday soon, he will possess the anti-christ to rule the world and wear out the saints. Effective he will be, until he is bound for a thousand years. Poor lil' slewfoot!

Fact is, Revelation 12:12 alerts us to his increased activity in the last days. He knows better than any of us that if he has anything needing done, he'd better get it done quickly, his days are numbered.

So don't be too shocked at the increased craziness in your life. The infernal forces are being mustered for some final drastic attempts to devour God's kids and His work. Remember, the thief's job is to steal, kill and destroy, so be on guard, stand strong, don the holy armor and make up your mind to endure to the end!
Posted by Pastor Fuller at 9:27 AM