They Had the Power 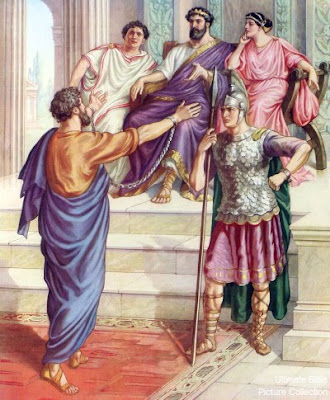 Act 25:12 Then Festus, when he had conferred with the council, answered, Hast thou appealed unto Caesar? unto Caesar shalt thou go. 13 And after certain days king Agrippa and Bernice came unto Caesarea to salute Festus. 14 And when they had been there many days, Festus declared Paul's cause unto the king, saying, There is a certain man left in bonds by Felix:

In the Footsteps of Pontius Pilate, Felix, Drusilla, Agrippa, Bernice and Festus were 5 nobles sitting in judgment of none other than the great Apostle Paul. They had the power to set him free but washed their hands in the fashion of Pilate.

What did all these people have in common?
*They were pompous, thinking of themselves more than they ought.
*They were swayed by popular opinion rather than doing what is right.
*They sat in judgment of one infinitely greater then they.
*They were persuaded and convicted, yet still chose foolishly.
*They sealed their eternity, coming down on the wrong side of guilt and innocence.

It is no wonder James says "My brethren, be not many masters, knowing that we shall receive the greater condemnation." James 3:1
Posted by Pastor Fuller at 5:29 AM