Gen 11:1  And the whole earth was of one language, and of one speech. 2  And it came to pass, as they journeyed from the east, that they found a plain in the land of Shinar; and they dwelt there. 3  And they said one to another, Go to, let us make brick, and burn them throughly. And they had brick for stone, and slime had they for morter. 4  And they said, Go to, let us build us a city and a tower, whose top may reach unto heaven; and let us make us a name, lest we be scattered abroad upon the face of the whole earth. 5  And the LORD came down to see the city and the tower, which the children of men builded. 6  And the LORD said, Behold, the people is one, and they have all one language; and this they begin to do: and now nothing will be restrained from them, which they have imagined to do. 7  Go to, let us go down, and there confound their language, that they may not understand one another's speech. 8  So the LORD scattered them abroad from thence upon the face of all the earth: and they left off to build the city. 9  Therefore is the name of it called Babel; because the LORD did there confound the language of all the earth: and from thence did the LORD scatter them abroad upon the face of all the earth. 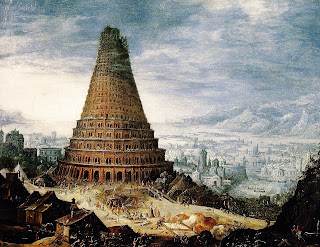 You got to hand it to these folks, but for God, they about pulled off the impossible. Their goal was to build a tower so high it would reach into the heavens. I believe this tower would be for the purpose of astronomical observation. This was not God's will, so He put a stop to it. But, let's see what they did right in their wrong doing.

1. They were unified. They were of one language and one speech. They were on the same page.
2. They had a plan, a goal and were determined to see it through.
3. They dreamed big. They wanted to do something monumental. Nobody ever remembers who came in second place. There are no "plays of the day" awarded to the team that punts. They wanted to pull something off that would forever be talked about and remembered.
4. They had a name. To this day, we talk about these folks who attempted the impossible and, according to God, were going to pull it off. They were "Babel-onians."
5. They had imagination. They weren't cookie cutter builders, nor were they in the business of building row houses. No, they were going to do something that had never been done, nor would ever be duplicated.
6. They were unstoppable. God said, "Now nothing will be restrained from them."

Only God could put a stop to this thing. Imagine though, if we were to attempt some great thing for God, according to His will, with these same principles and with the same dogged determination! What if we did the right thing, the right way? Nothing ventured, nothing gained folks.
Posted by Pastor Fuller at 5:24 AM