Four Fingers Pointing Back at Me. 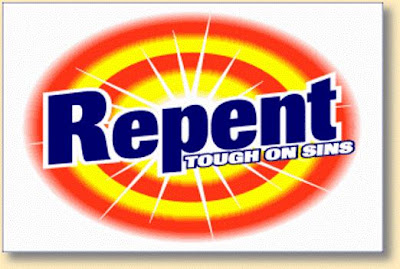 Psa 6:6 I am weary with my groaning; all the night make I my bed to swim; I water my couch with my tears.
Psa 6:7 Mine eye is consumed because of grief; it waxeth old because of all mine enemies.
Psa 6:8 Depart from me, all ye workers of iniquity; for the LORD hath heard the voice of my weeping.

Far be it from me to say of the king, "poor David", for he sure had his faults and brought a lot of this groaning and crying upon himself. The Lord promised him that the sword would not pass from his house. Sure enough, there was plenty of infighting and other misbehavior on the part of his kids.

Also, we find David doing a lot of complaining about his enemies. So would I if people were constantly harassing me, trying to depose me from my God-given throne, and even making attempts on my life.

But you gotta realize that his enemies made themselves so not just because David touted the things of the Lord, but because of the hypocrisy involved.

Imagine if your pastor or your president had committed adultery with the neighbor's wife and then had the husband jackpotted in battle, resulting in his death. Imagine him saying, for the next several weeks, "I never had sex with that woman!" When the truth was about to be known by way of a pregnant Bathsheba. And then, witness him being extremely harsh, even demanding the life of a made up tyrant a la Rev. Nathan, not realizing that "he was the man."

Honestly, we would have little grace toward a leader like that. We would want them run out of town on a rail after being tarred and feathered.

Did you catch that? When everyone else gives up on a person, God doesn't. When we disqualify an individual, God re-qualifies them. He is the God of the second (and third and fourth and five hundredth) chance!

I can relate. There is no reason I should still be sucking air. I wonder why I don't have as many enemies as David, considering all my faults and foibles. But David was a better repenter than he was a sinner. God is a good and merciful God, pardoning iniquity when forgiveness is undeserved.

To boot, God goes on to call this king, "a man after God's own heart." The press must have had a heyday at David's expense. His enemies must have been livid that their efforts against him were foiled. But God delighted in granting him mercy and heavenly favor.

Ditto for me. Thank you, Lord!
Posted by Pastor Fuller at 6:23 AM