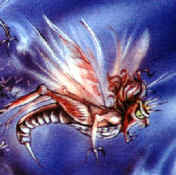 Rev 9:1 And the fifth angel sounded, and I saw a star fall from heaven unto the earth: and to him was given the key of the bottomless pit.
Rev 9:2 And he opened the bottomless pit; and there arose a smoke out of the pit, as the smoke of a great furnace; and the sun and the air were darkened by reason of the smoke of the pit.
Rev 9:3 And there came out of the smoke locusts upon the earth: and unto them was given power, as the scorpions of the earth have power.
Rev 9:4 And it was commanded them that they should not hurt the grass of the earth, neither any green thing, neither any tree; but only those men which have not the seal of God in their foreheads.
Rev 9:5 And to them it was given that they should not kill them, but that they should be tormented five months: and their torment was as the torment of a scorpion, when he striketh a man.
Rev 9:6 And in those days shall men seek death, and shall not find it; and shall desire to die, and death shall flee from them.
Rev 9:7 And the shapes of the locusts were like unto horses prepared unto battle; and on their heads were as it were crowns like gold, and their faces were as the faces of men.
Rev 9:8 And they had hair as the hair of women, and their teeth were as the teeth of lions.
Rev 9:9 And they had breastplates, as it were breastplates of iron; and the sound of their wings was as the sound of chariots of many horses running to battle.
Rev 9:10 And they had tails like unto scorpions, and there were stings in their tails: and their power was to hurt men five months.
Rev 9:11 And they had a king over them, which is the angel of the bottomless pit, whose name in the Hebrew tongue is Abaddon, but in the Greek tongue hath his name Apollyon.

A little something in store for the God-haters.
Posted by Pastor Fuller at 6:10 AM