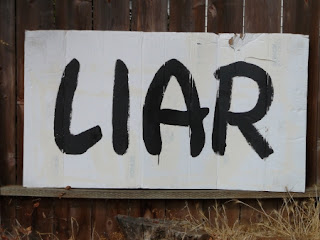 Luke 23:1 And the whole multitude of them arose, and led him unto Pilate. 2 And they began to accuse him, saying, We found this fellow perverting the nation, and forbidding to give tribute to Caesar, saying that he himself is Christ a King.

These pious pukes were all about power and control. Since Jesus would not play their game, they had to eliminate Him. Nothing else worked, so they resorted to fraud and deception.

Lie 1) We found this fellow perverting the nation. The nation is the race of the Jews. As He said, He did not come to destroy the law but to fulfill it. The perversion had already been accomplished by His accusers. On so many fronts they misrepresented the Word of God to their religious underlings. He came to set things right.

Lie 2) He was forbidding people to pay their taxes. Again, this was an insidious perversion of what He taught them. Earlier, when they came to Him, tempting Him, they asked, "Is it lawful to pay tribute to Caesar?" He said, "Bring me a penny" and when they had done so, He said, "Whose is the image and the superscription?" "Caesars," they answered. Then He specifically told them, "Render therefore unto Caesar the things that be Caesars’ and to God the things that are God's." A great chasm exists between what actually happened and what they were falsely accusing.

Lie 3) He said that He Himself is Christ a king. Well, He surely was and is, but it was not He who said it. They asked Him in the previous chapter if He was Christ and He simply replied, "If I tell you, ye will not believe:"

Lies! The whole body of accusations they claimed against Jesus to Pilate showed whose servants they were, "Ye are of your father the devil, and the lusts of your father ye will do. He was a murderer from the beginning, and abode not in the truth, because there is no truth in him. When he speaketh a lie, he speaketh of his own: for he is a liar, and the father of it." John 8:44

It pays to be honest. Moreover, honesty delineates you from the devil’s crowd.

Posted by Pastor Fuller at 6:00 AM